This Parkzone F4U-1A Corsair parkflyer WWII Warbird RC Plane Unboxing, Maiden Flight, and Flight Review video review contains an unboxing, maiden, and review to show what one should expect if they purchase this PNP (Plug-N-Play) RC model. I am very honest and have no bias since I paid for this myself.

This RC Plane Park Flyer is brought to us by RC juggernaut Horizon Hobby. This is also a favorite of many WWII Warbird fans and may be one of the better PZ Parkflyer options they have ever released under their Parkzone brand, though it is debatable if this plane is in fact an upgrade over the previous version for fancy flaps and retracts.

My review notes for the F4U-1A Corsair Parkzone, which is the newest Parkzone F4U Corsair are as follows:

Cons:
– The paint is very fragile
– The bomb drop fasteners are weak
– Landing gear hardware could be better
– It needs a lot of trim out of the box

Takeaway: This is a very nice RC plane in the Parkzone Corsair, but it is not a T-28 Trojan! This plane was flown 100% stock with the exception of flying with a Gforce 2200mAh lipo battery.

Remote Control Planes like this are one of the main reasons why I have become so addicted the hobby. The advent of the BNF (Bind and Fly) and PNP (Plug and Play) makes it easy to become addicted to Horizon Hobby brand products such as Parkzone, E-flight, and Blade. I can fly all of their planes and Heli’s with my trusty DX6i 6-channel transmitter radio.

Here is some history on this plane via Wikipedia:

The U.S. Navy received its first production F4U-1 on 31 July 1942, but getting it into service proved difficult. The framed “birdcage” style canopy provided inadequate visibility for deck taxiing. Even more seriously, the machine had a nasty tendency to “bounce” on touchdown, which could cause it to miss the arresting hook and slam into the crash barrier, or even go out of control. The long “hose nose” visibility problem and the enormous torque of the Double Wasp engine also created operational problems.

Carrier qualification trials on the escort carrier USS Sangamon, on 25 September 1942, caused the U.S. Navy to release the type to the United States Marine Corps.[34] Early Navy pilots spoke disparagingly of the F4U as the “hog”, “hosenose” or “bent-wing widow maker”.[35] After all, the U.S. Navy still had the Grumman F6F Hellcat, which did not have the performance of the F4U but was a far better deck landing aircraft. The Marines needed a better fighter than the F4F Wildcat. The type was declared “ready for combat” at the end of 1942, though only qualified to operate from land bases until carrier qualification issues were worked out.[36]

The US Navy did not get into combat with the type until September 1943, and the Royal Navy’s FAA would qualify the type for carrier operations first. The U.S. Navy finally accepted the F4U for shipboard operations in April 1944, after the longer oleo strut was fitted, which finally eliminated the tendency to bounce.[40]

The first recorded combat engagement was on 14 February 1943, when Corsairs of VMF-124 under Major Gise assisted P-40s and P-38s in escorting a formation of Consolidated B-24 Liberators on a raid against a Japanese aerodrome at Kahili. Japanese fighters contested the raid and the Americans got the worst of it, with four P-38s, two P-40s, two Corsairs and two Liberators lost. No more than four Japanese Zeros were destroyed. A Corsair was responsible for one of the kills, although this was due to a midair collision.

I am also happy to report that I did not crash on my maiden. That is always a nice feeling, especially when it is being used for an unboxing and review video 🙂

(2)
(as of September 23, 2020 - More infoProduct prices and availability are accurate as of the date/time indicated and are subject to change. Any price and availability information displayed on [relevant Amazon Site(s), as applicable] at the time of purchase will apply to the purchase of this product.)

(124)
Propeller: P-51 BL, 9 x 6 ParkZone (as of September 23, 2020 - More infoProduct prices and availability are accurate as of the date/time indicated and are subject to change. Any price and availability information displayed on [relevant Amazon Site(s), as applicable] at the time of purchase will apply to the purchase of this product.)

(4)
Made by ParkZone (as of September 23, 2020 - More infoProduct prices and availability are accurate as of the date/time indicated and are subject to change. Any price and availability information displayed on [relevant Amazon Site(s), as applicable] at the time of purchase will apply to the purchase of this product.) 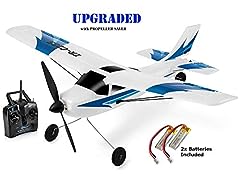 (432)
Top Race 3 Channel Rc Plane for Adults Remote Control Airplane Ready to Fly TR-C285G UPGRADED UPGRADED: New Propeller Saver Technology, to save RC plane from damage. Easy to Fly rc Plane! Amazing Remote Control Plane with 3 level flying, Easy, Medium... (as of September 23, 2020 - More infoProduct prices and availability are accurate as of the date/time indicated and are subject to change. Any price and availability information displayed on [relevant Amazon Site(s), as applicable] at the time of purchase will apply to the purchase of this product.)

Sweet plane. I am thinking of getting a corsair someday. Love the classic WW2 war birds.

i am thinking of getting one with the safe fly (panic button) to start with , how do you learn about trimming in the controls etc.?

I wonder when this plane will be made as light as possible (without flaps and landing gear servos, drop tanks etc.) can be flown with parkzone wildcat 480 960 Kv motor and parkzone radian 30 A ESC? I want to make it belly lander becouse i dont have runway at my flying field…

Hahaha I did the same with my super cub’s wing!

Were did you get this

I really hope they rerelease this plane like they did with the AS3X Mustang and now the new Thunderbolt…  I can’t stand the current Corsair S model and want to see it with all the equipment built in like the other two warbirds.

She hit me and yelled “HEADSHOT” and ran away laughing

Thanks again for another review. It is nice to have someone take time to actually do a review with good information. I had to chuckle about the fragile paint. It will be a great day when a foamie comes with paint that halfway sticks.

Great video! You made me want to buy one and I will love it. Thanks for pointing out everything!

I love the way you did the video thanks for sharing.

I’m getting one soon do the wheels work

Check out this guy’s BARBIE DOLL Collection review.  He sounds way more serious in that one.  Ye.. real men have more than one hobby!  It’s really pretty!

beautiful take off sound. I have one too but weather isn’t letting me fly it

Does it come with a radio transmitter

What you youse to make plane goes left and right? Rudder on the left or ailerouns on the right?

i could never fly a plane that well!

Thanks! Just bought one

I just subscribed, excellent video and review of this aircraft. Very impressive. I wanted to see a good review of this model before buying it and you did just that, off to Hobbytown!!

I have the tower hobbies corsair and I’m afraid to fly it because the first time I flew it , it banked very hard to the right and almost crashed then I flew it later it was fine then flew it few weeks later and did a hard dive to the right its all good but the cow is abit banged up any one know why it did that